10 Dishes To Try In Mauritius, A Culinary Powerhouse

Dining
10 Dishes To Try In Mauritius, A Culinary Powerhouse
Share
Next article

Beyond its achingly gorgeous cyan lagoons and toes-in-the-sand perfection, Mauritius is also a culinary powerhouse. Spanning two and a half centuries and three continents, its multicultural cuisine bears influences of successive waves of immigration from Europe, Africa, India, and China. This means you can eat your way around the world within the confines of the tiny island. Check out the best local eats. By Sona Bahadur

These 10 dishes capture the complexity of Mauritius’ flavour profile 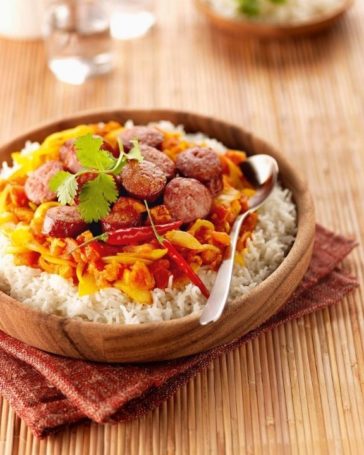 This quintessential creole red sauce with a rich taste and velvety texture is the sine qua non of Mauritian cuisine. Made with diced tomatoes, onions, garlic, peppers, curry leaves, and thyme, it is the perfect vehicle for everything Mauritians make, from pastas to meats, seafood to dholl puri. I had a magnificent blend of dried prawns simmered with this vibrant red sauce at a beach dinner at Sofitel Mauritius L’Impérial Resort & Spa. Another favourite was rougaille saucisse, a traditional stew of sausages tossed with the sauce and accompanied by rice and a salad. 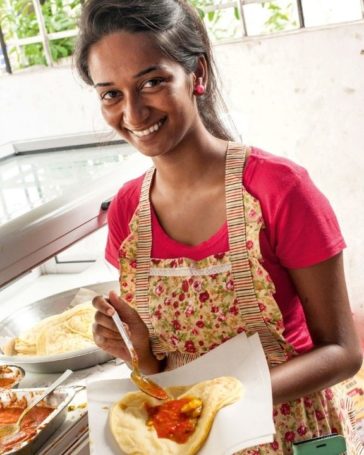 You can’t visit Mauritius without knocking off a piping-hot dholl puri or two. The Indian-style flatbread, encased with chana dal and served with a filling of butter beans curry, rougaille, chilli sauce, and bred (steamed greens), comes closest to being the national dish of Mauritius. More than simply being a great street food, the wrap offered me food for thought—about the indentured labourers from India who brought this food to Mauritius when they came to work on the island’s sugarcane plantations in the late 1800s. Spicy-food lovers should say yes to the eye-wateringly hot chilli paste optionally served with the roll.

Dewa and Sons in Rose Hill, or at any of the dholl puri kiosks that dot the island. 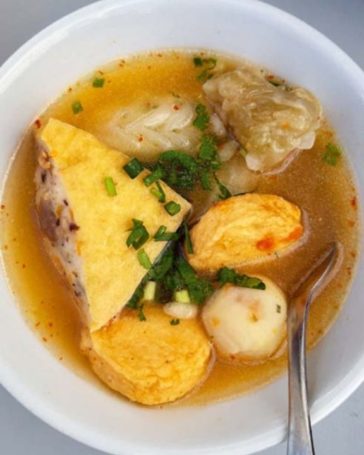 Whether you devour them on their own, in a soup, or as a side to a plate of fried noodles, you will love these Mauritian dumplings, especially after a night of guzzling the local Phoenix beer. These steamed dim sums, introduced by migrants who came mostly from the southeastern part of China during the 19thcentury, taste terrific with piment écrasé (a Mauritian chilli paste). Though chouchou or chayote boulettes—also known as niouk yen—are classics, variations abound. Meat balls, fish balls, chicken, and smoked tofu often find their way into their doughy centres.

Ti Kouloir in Grand Baie, or a food stall in Chinatown, Port Louis. 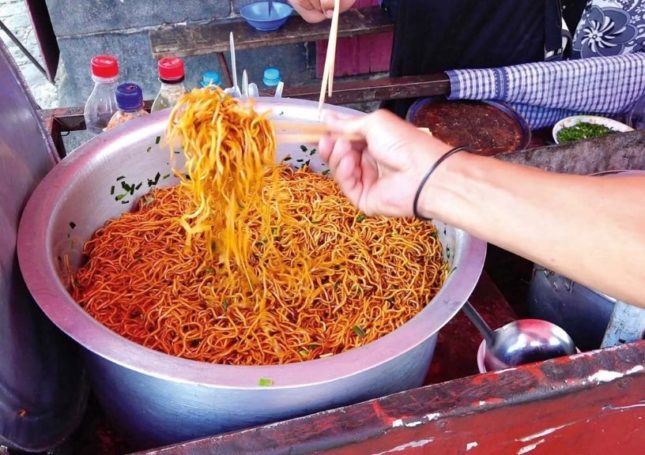 Going out for mine frite is a local pastime. The staple of smoky hot fried noodles is typically coated with salty and sweet soy sauce, and elevated with toppings like chicken, prawn, lamb, or beef. Just as popular are mine bouille, or simply boiled noodles served with toppings of your choice, which could include rougaille, minced meat, or even a thinly sliced omelette. Typically served on the street, or in Chinese restaurants, this dish is easy to prepare and often comes garnished with chopped coriander leaves. 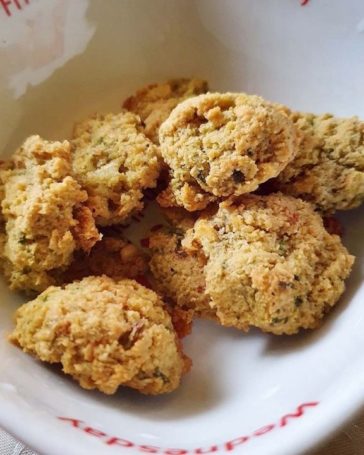 Crisp on the outside and pillowy within, this classic street food gives Mauritius one more thing to brag about. The addictive little chilli poppers are a breakfast staple across the island and also make for a popular go-to snack. Made using a mixture of soaked chana dal, turmeric, spring onions, and chillies, the deep-fried morsels reminded me of Indian vadas (the Mauritian versions are smaller and taste different), but also of falafels. Though terrific in a salad, they are irresistible when served on a freshly baked, warm baguette with a side of chilli sauce.

On the beach in Grand Baie, or at the covered market in Quatre Bornes.

In Mauritius, Diwali is synonymous with gateau patate, or deep-fried sweet potato pasties stuffed with sweet potato, coconut, cardamom, and lots of sugar. These parcels of joy are a lot like the Indian karanji, except the flour is mixed with sweet potatoes. Though regarded as a speciality of neighbouring Réunion Island, the dish is equally popular in Mauritius. Most Mauritians make this at home and swear that their grandma’s recipe cannot be beaten.

A local’s home or at Dilkush Sweets in the village of Triolet. 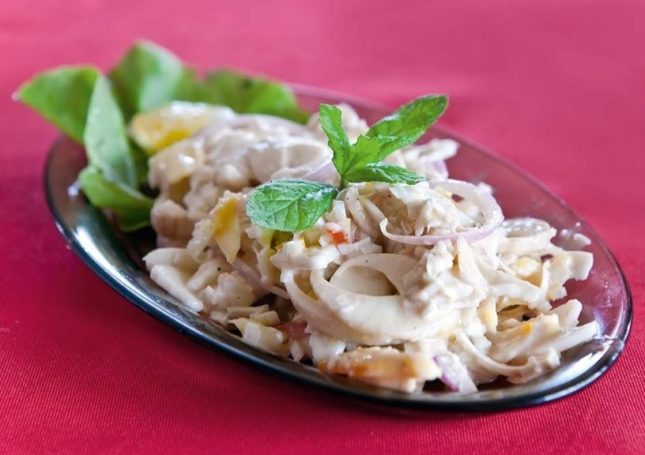 A quintessentially Mauritian experience, this delicate salad stars palm hearts—the cylindrical core of certain species of palms. It will cost you a pretty penny to eat this native treat at an upscale eatery. That’s because palm hearts are rare—and shrouded in controversy as they can be harvested only after the palm tree has been cut down and the bark removed. Crunchy, and akin to bamboo shoots in texture, the pale 30-centimetre hearts are shredded into thin white strips and served with a drizzle of olive and lemon. I found the bland taste a tad underwhelming but relished the delicacy when it was paired with smoked marlin—a classic Mauritian combination. 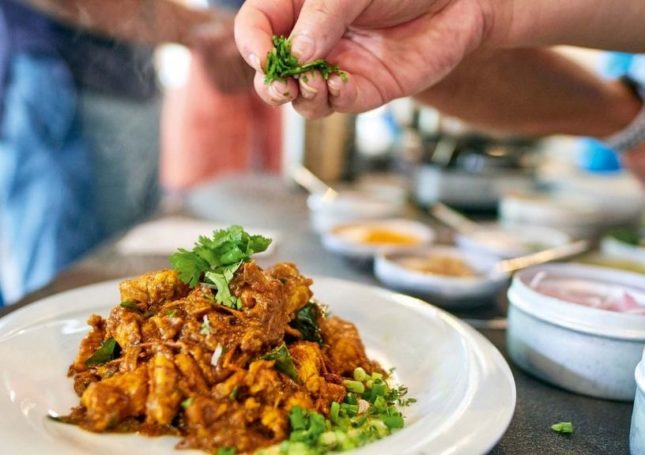 I could doze through many an afternoon after filling up on this curry, which features the unusual combination of prawns and chicken. It is similar to the Indian version but stands out with its Mauritian twist. The difference, as London-based Mauritian food blogger Brinda Bangaroo explained to me, is that aubergine is usually added to the Mauritian version, giving it a thicker consistency. Also, the blend is milder than a South Indian curry or Goan vindaloo. 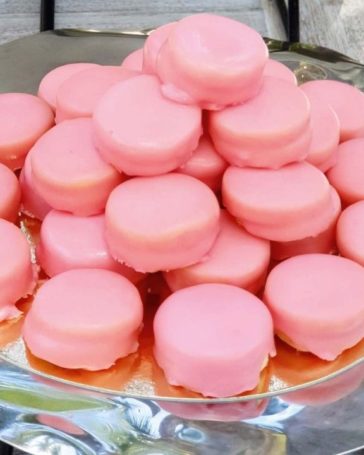 It may sound French, but there is nary a napolitaine to be found in all of France. The pink confection, more akin to a butter cookie or sablé than a macaron, is uniquely Mauritian. The cookie sandwich is made with strawberry jam ensconced between two shortbread biscuits and topped with a layer of icing sugar. Soft, crispy, and grainy by turns, the eggless treat stands apart with its unique texture. Traditional napolitaines are pink, with a dominant vanilla flavour, but you could also try them in flavours like chocolate and strawberry. They’re heavenly with Bois Cheri vanilla tea.

This local frozen treat, invented around 90 years ago by the Jewon family using a secret homemade recipe, is a Mauritian institution today. The artisan sorbet is available in a rainbow of colourful flavours such as strawberry, chocolate, almond, and vanilla. Each dreamy cup or cone of ice cream is garnished with grated coconut and Vona Corona’s signature pineapple coulis. Famous for its quality, this one is also lick-worthy for its heritage value.

The Vona Corona parlour in Rose Hill or at the Port Louis Central Market.

Air Mauritius is the flag-carrier airline of Mauritius. They have flights from Mumbai and Delhi.

Emirates has several flights from India to Mauritius via Dubai.

LUX Grand Gaube Resort & Villas: Located in the far north of Mauritius, this retro-chic beach retreat delivers the perfect blend of luxury and intimacy. Doubles from INR 25,000 per night.

Club Med Albion: This all-inclusive beachfront resort on the island’s west coast boasts stunning views of the Indian Ocean and offers activities galore for the entire family. Doubles from INR 44,000 per night.

To explore the local cuisine, book a street-food walk with My Moris, a boutique tour operator based in Port Louis.

Related: If You’re Planning A Holiday To Mauritius, Stay At The Oberoi Beach Resort For An Unforgettable Adventure

Are You Up For Trying The Viral Masala Dosa Ice Cream Rolls? The Latest Food Experiment From Delhi

Dining
7 Korean Restaurants In Bengaluru That Bring Authentic Flavours To Your Doorstep
Dining
Head To These Breweries In India For Some Deliciously Chilled Beer
Dining
Recipes Inspired By Attack On Titan To Gear Up For The Much...
Dining
Bookmark These Top 8 Cloud Kitchens In Mumbai Today!
Dining
These Cloud Kitchens In Kolkata Are Serving Delectable Meals At Your Doorstep
Dining
Explore India’s January Harvest Festivals Through The Food That Makes Them Special