With Ganesh Chaturthi just around the corner, artisanal modaks are in high demand.

A significant Hindu religious festival, Ganesh Chaturthi is celebrated across India, particularly in the state of Maharashtra. Mumbai’s Ganesh Chaturthi celebrations are so majestic that for years the festival has been a top draw for both devotees and tourists.

Massive idols of Lord Ganesha, each of which is an artistic masterpiece, are reverently worshipped by the faithful who pray to the powerful son of Shiva and Parvati for protection, prosperity and good fortune.

At the end of the festival, the idols are taken out as elaborate processions through the city to be immersed in the sea. But, like last year, the risks because of the COVID-19 pandemic have led to restrictions on Ganesh Chaturthi processions in many states in 2021, too.

This does not mean that we cannot celebrate the festival at home while adhering to the restrictions. One way is to get the best of modaks delivered home as an offering to Ganpati bappa, as Ganesha is lovingly called.

Modak is a specially-made sweet, believed to be Lord Ganesha’s favourite, by encasing jaggery and freshly grated coconut in a steamed rice dumpling. Ganesh Chaturthi, for many, is incomplete without this sweet delight!

Over the years, the traditional modak has undergone a facelift, thanks to patisseries and sweet shops that have infused contemporary flavours with the traditional ones. There are so many flavours today that it could get difficult to pick a favourite. In Mumbai, the quintessential flavour of traditional Marathi dishes, such as puran poli, a type of flatbread, has also been used to make artisanal modaks. 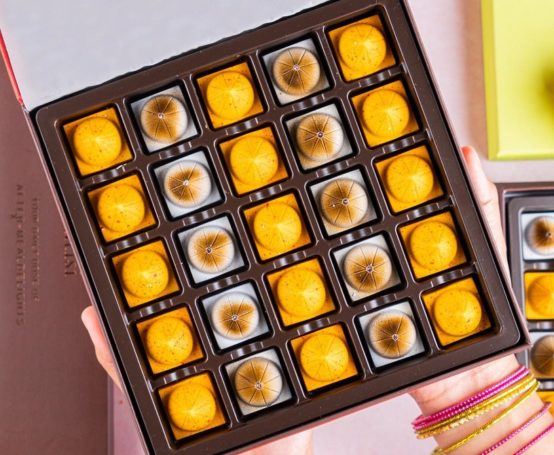 Founded by the London School of Economics alumna, Nikki Thakker, Éntisi Chocolatier has quickly become a renowned name in chocolatiers. With the perfect blend of ideas and technique, it offers bars, bonbons, dragees and cute cubes in various shapes, sizes and flavours.

For Ganesh Chaturthi 2021, Éntisi Chocolatier has introduced a limited edition menu of chocolate modaks in two varieties: tender coconut and saffron pistachio. The centres of these modaks are filled with Éntisi Chocolatier’s signature chocolates, and they come in boxes of four, seven, 12 and 25, that are priced at INR 300, INR 495, INR 895 and INR 1,795, respectively. 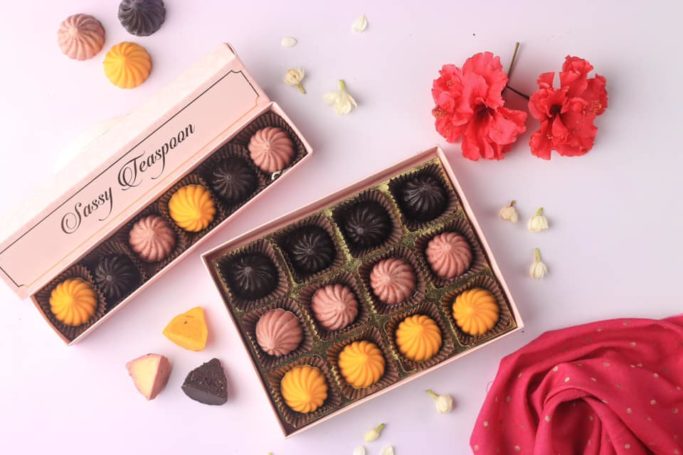 Sassy Teaspoon, located in Mumbai and Pune, has several outlets in the two Maharashtrian cities. Known for its delectable cakes and pastries, the bakery also makes special artisanal modaks ahead of Ganesh Chaturthi.

This year, Sassy Teaspoon has given what it calls a “sassy twist” to the traditional sweet. There are three flavours of chocolate modaks: Kesar Peda Cheesecake, Chocolate Barfi, and Kopra Pak and Ruby Chocolate. They are available in colours of chocolate brown, bright yellow and rose pink. Boxes of six and 12 cost INR 445 and INR 795, respectively, excluding taxes. 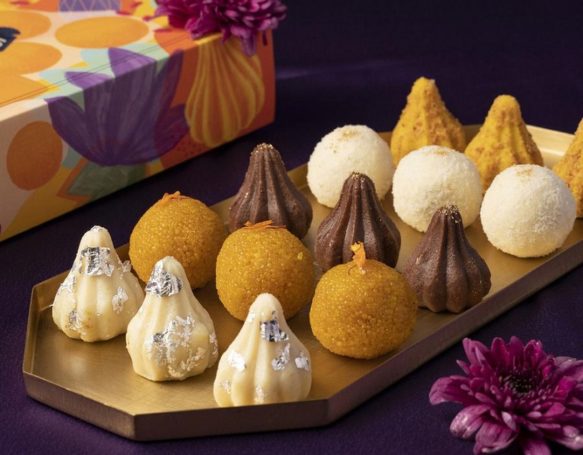 Launched in March 2020, Bombay Sweet Shop witnessed an incredible rise in popularity in a really short span because of its innovative and delicious products. This year, it has launched its second Ganpati collection.

The artisanal modaks look delightful and taste heavenly. Among its variants, the Kaju Pineapple Modak contains spiced pineapple jam, while the Chocolate Fudge Modak is loaded with a silky dark chocolate ganache. The flavourful Puran Poli Modak, which made its hit debut last year, comes with a potent mix of jaggery, chana dal and cardamom.

Boxes of nine and 21 are priced at INR 750 and INR 1,590, respectively. Modaks can also be paired with motichur laddoos — another favourite of the Ekadanta (which literally translates into “one-toothed”) — and Nolen Gur Kheer Kadams in a specially curated ‘When Motichur Met Modak Box’, which costs INR 1,290. 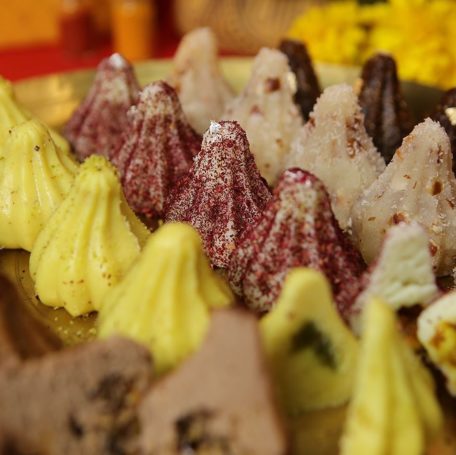 Ornamental Mithai is the realisation of its founder Neelam Saini’s successful transformation of traditional Indian sweets into contemporary delights, which are both tasty and incredibly attractive. An example is the Vilayati Boondi, which is the traditional boondi laddoo mixed with cranberries.

For this year’s Ganesh Chaturthi, Ornamental Mithai offers modaks in flavours of cocoa malt, kesar pista, rose malai, coconut chironji, and fig poppy. An assortment of all these flavours come in boxes of five, 10, 15 and 20 and are priced at INR 300, INR 600, INR 900 and INR 1,200, respectively. 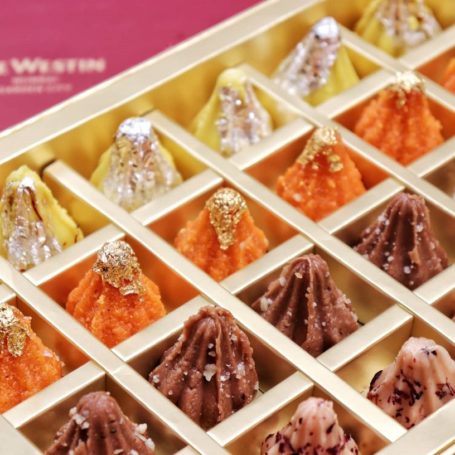 The Westin Mumbai Garden City is known as the go-to place in Goregaon for major business meetings and elite social gatherings. It is also an excellent place for the most delectable of dishes, ranging from Italian to authentic Indian.

As for this year’s Ganesh Chaturthi, the hotel has a specially curated box of artisanal modaks. There are four delicacies: Pistachio Chocolate Modak, Nutella Modak, Moti Choor Modak, and Malai Chia Seed Modak.

Binging Through Bangkok And Exploring Its Culinary Side, One Bite At A Time

Why We Can’t Get Enough Of Singapore’s Hainanese Western Food?

We're back with the 10th edition of our annual fla

In the last creation from late artist Christo, the

Spain (@spain) has reopened for travellers from In

Blending the best of modern French art de vivre an