Mamagoto’s Shanghai Nights Menu Is Doused In Cocktails, And We’re Not Complaining!

Dining
Mamagoto’s Shanghai Nights Menu Is Doused In Cocktails, And We’re Not Complaining!
Share
Next article

Heady cocktails backed by intriguing stories and paired with Mamagoto’s signature pan-Asian dishes, the ongoing Shanghai Nights menu at the multi-city restaurant leaves us happy high. Join along to get a glimpse of our tasting. Text and photographs by Bayar Jain 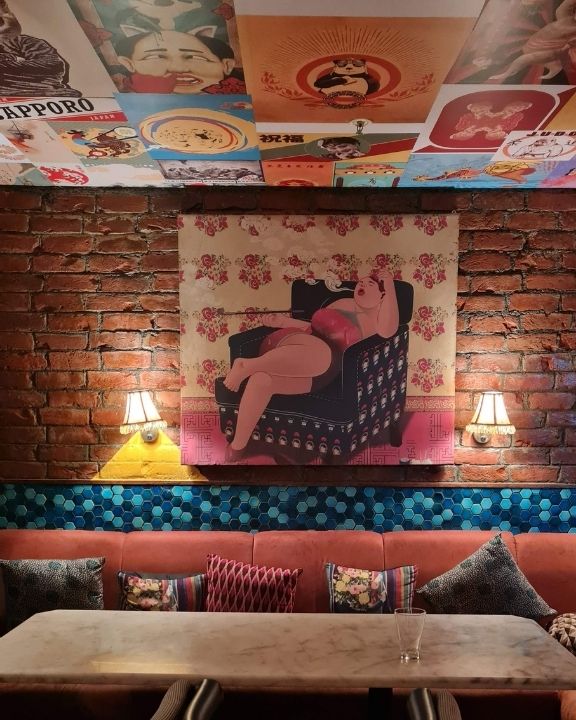 If you ask me, the ideal way to unwind after a long workday is when an array of cocktails await. Lucky for me, the Shanghai Nights special limited-edition cocktail menu at Mamagoto seems to believe the same. Come sunset, I shut my laptop and scurry along to CyberHub Gurgaon to let alcohol goodness wash over me. 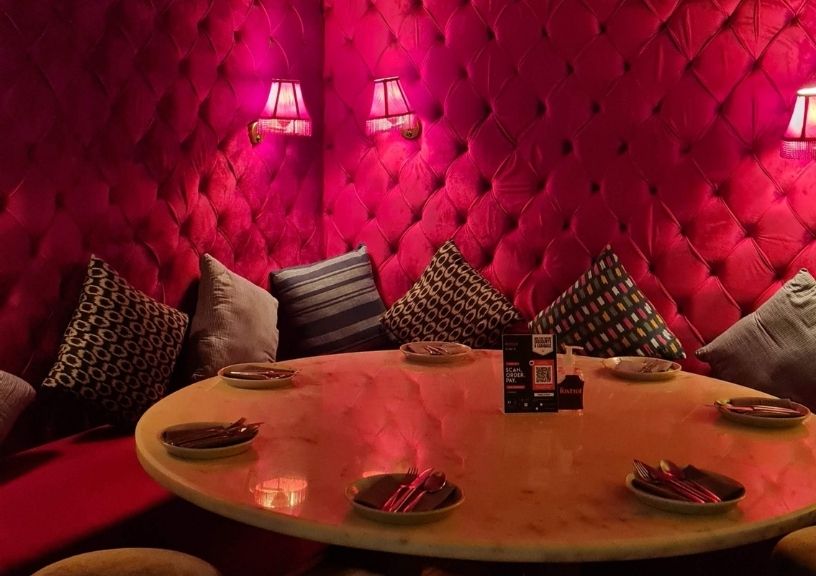 Mamagoto is not a new space for me. I’ve always admired its quirky, colourful decor that exudes playfulness in every corner. Tonight, too, I find myself marvelling at the countless fun posters (my favourite? A philosophical cat that says “men who cut self while shaving lose face”) and the bursts of vibrancy throughout. There’s even a lounge-style circular corner—overlooking the expansive bar—complete with plush seating and vintage lampshades jutting out from the cushioned walls! Despite the retro vibes sweeping the diner, sanitisers on the tables and mask-clad staff remind of today’s dystopian reality. A welcome reminder indeed!

The servers present me with multiple menus—a proof of the many hats that Mama wears: a regular Mamagoto menu, featuring Asian dishes; a bar menu, courtesy of Foxtrot; one dedicated to sushi; and tonight’s glory, the Shanghai Nights menu. 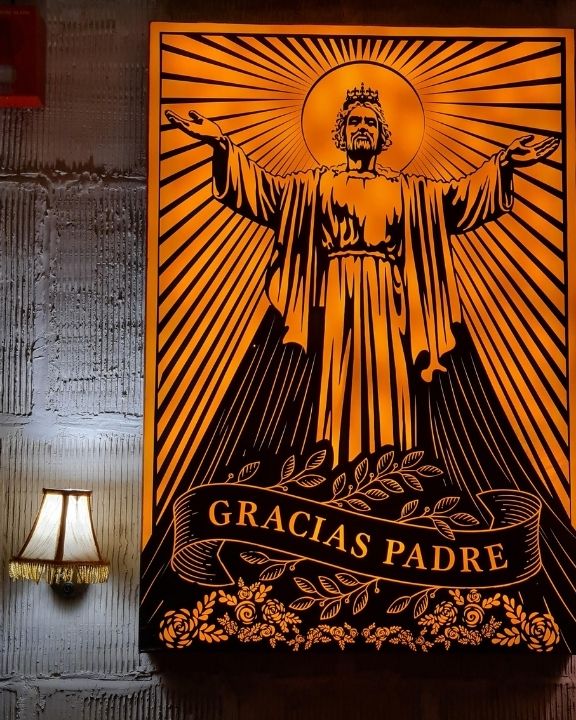 The Shanghai Nights menu is inspired by the hedonistic, liberal metropolitan of the 1920s and 1930s. Think gambling dens, jazz clubs, gangsters. In short, a Great Gatsby-esque energy that also doubled as the coming together of Chinese and international celebrities. This limited-edition seven-page cocktail menu pays homage to this nostalgic cultural revolution. A flip through each page reveals varied concoctions, each of which has intriguing backstories and equally alluring names.

Le Shanghai, for instance, seeks inspiration from the city’s 1920s nickname–The Paris of the Orient. Its recipe, too, recreates this intermingling of the Eastern and Western cultures. Whisky and hazelnut syrup—ordinarily associated with the West—team up with apple chunks and maple, two commonly found ingredients in China. Shanghai 1935 (tequila, apple chunks, pear chunks, chaat masala, Demerara sugar), on the other hand, marks the year the New York-Shanghai illicit trade first took off. Some of the other drinks on the menu include Lady of Shanghai (whisky, white rum, bitter syrup, mint leaves and lime juice), inspired by cheongsam—a body-hugging dress that was modernised in Shanghai, and popularised by socialites; Wild Dance (bourbon, lime juice, grenadine, honey, and passion fruit syrup), named after the city’s first real jazz band; Miss 1984 (gin, lime juice, honey syrup, lavender syrup, and soda), named after the license plate of the feminist icon and the first women to graduate from Funda University, Yan Yunyun.

I choose to kickstart the night with Smuggler’s Paradise, a drink named so due to the city’s former image as a heaven for trade in illicit merchandise and toxicants. Out comes a bright orange tonic. The dark rum interlaced with brandy packs a punch, which is cut beautifully by the refreshing citrus notes of the lime juice and angostura bitters. The mint leaves add just the right dose of freshness to the drink, leaving behind a clean palate that compels me to sip some more.

But a drink without snacks is sacrilegious. The bite-sized corn fritter balls catch my eye. The flour-encased, deep-fried corn kernels are crunchy, just as expected. However, the accompanying Firecracker Oriental Salsa is a game-changer. The tangy salsa hits the rights notes on my ‘spice metre’, reaching Scoville levels just enough to compel me to go for double-dips.

Next, Vegetarian California Rolls. After all, a trip to Mamagoto is incomplete without a serving of sushi! The skillfully wrapped makizushi rolls are dotted with sesame, and bits of cucumber and avocado are snuggled in the rice. A dollop of cream cheese on each of the eight pieces gives the rolls another refreshing dimension.

With starters done, I decide to order my next tonic: In the mood for love. When a drink is named after a famous Oscar-winning feature film based on old-world Shanghai, it’s only natural for theatrics to weave into the frame as well. A shroud of mysticism covers my red drink, courtesy a smoke bubble dome covering the rim. A sip later I learn that this theatrics is not all for show. The smoky undertones pair beautifully with the tequila and rosé vermouth base. Despite the blend of apricot puree, muddled strawberries, and vanilla syrup, I’m pleasantly surprised by the lack of overt sweetness. The bitters and lime juice, too, add a delicious flavour to the heady drink.

For mains, the spicy Bangkok bowl beckons. I opt for a vegetarian version with sticky rice, as opposed to regular grains. Garnished with potato wedges, chopped red chillies, and a lemon wedge, this Ba Ka Pao-reminiscent hearty bowl has me hooked. While the corn-loaded rice sings of spice and herbaceousness, it’s the wholesome flavours of the chopped chillies that floor me.

With my palate now sweating for respite, and my stomach gasping for breath, I calm the fury with a slice of Mama’s Chocolate Cake Slice (and a scoop of vanilla ice cream, on special request). While I would have liked the slice to be warm, the layered cocoa goodness lives up to its name. The sponge is sweet, the ganache is rich, and I’m stuffed. With this, I end my mini trip to Shanghai’s yesteryears with a happy soul and a big smile.

Timings: while the timings differ in each outlet, most open at 12:00 noon and close by 11:00 pm. Head to their official website for outlet-wise details.

Dining
Are You Up For Trying The Viral Masala Dosa Ice Cream Rolls?...
Dining
7 Korean Restaurants In Bengaluru That Bring Authentic Flavours To Your Doorstep
Dining
Head To These Breweries In India For Some Deliciously Chilled Beer
Dining
Recipes Inspired By Attack On Titan To Gear Up For The Much...
Dining
Bookmark These Top 8 Cloud Kitchens In Mumbai Today!
Dining
These Cloud Kitchens In Kolkata Are Serving Delectable Meals At Your Doorstep