By Priyanka Lamba
Get the best news and reviews from Travel + Leisure India delivered straight to your inbox.
Share

India presents a potpourri of various cultures where people hailing from diverse backgrounds come together to celebrate a myriad of festivals. Everything — from food to attire — varies from state to state. Hence, the way festivals are celebrated, too, differs, along with customs and rituals. However, one thing remains unchanged — the devotion to gods and goddesses and the joy these festivities bring along. By Priyanka Lamba

Durga Puja and Navaratri are similar festivals celebrated in different ways across the nation. Both festivals signify the removal of darkness and the triumph of good over evil.

Although Navaratri revolves around worshipping various forms of Goddess Durga, it is a nine-day celebration of Lord Rama’s win over Lankan demon king Ravana. On the other hand, Durga Puja marks the victory of the Goddess over the demon Mahishasur. Moreover, Durga Puja is majorly celebrated in the East, while Navaratri is mostly seen in other parts of the country. Additionally, the ways to worship Goddess Durga also differ — while some devotees prefer to feast, others fast.

This year, Navaratri will begin on October 7 and end on the 15th of the same month. Meanwhile, Durga Puja will be celebrated from October 11 to 15. Marking the end of the festivities, Dussehra or Vijayadashami falls on October 15.

As the festive season draws closer, the streets of various cities are decked up to welcome the divine in all her glory and the enthusiasm and positivity of the people.

Be it stage and pandal decorations, planning cultural fests, dancing the night away or preparing elaborate meals for devotees, all become a part of the festivities that lead to worshipping the goddess. In some states the idol of Goddess Durga is immersed in water on the 10th day, while others celebrate Dussehra by burning the effigies of demons like Ravana, Kumbhkarana and Meghanada. 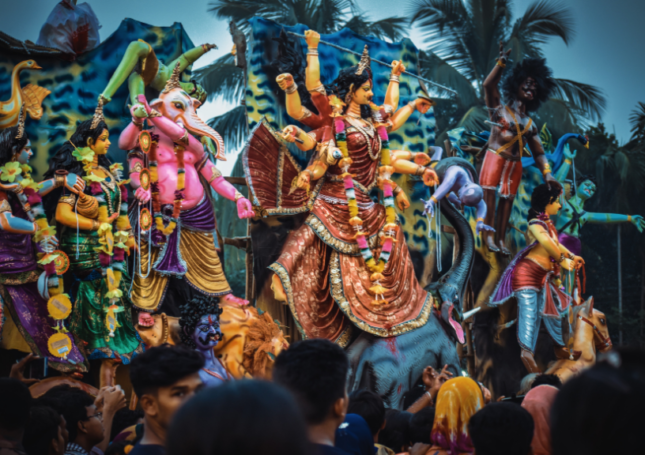 Durga Puja is one of the most-awaited events in West Bengal. Preparations to welcome Goddess Durga, who is often referred to as Maa, or mother, begin about a month before the scheduled date. While the streets of Kolkata are lit up with elaborate lighting during the night, magnificent pandals and ornate idols are set up at various places across the state. Flocking at pandals, dancing to the tunes of dhak (a percussion instrument) and feasting on scrumptious bhogs (blessed food) are part of the celebrations.

One of the most significant events marking the last day of the festival is Sindoor Khela where married Bengali women usually smear vermillion, or sindoor, on each other’s faces. This takes place after they have bid adieu to the goddess. On this day, called Dashami, devotees immerse the idols in a water body to only wait for her return the following year.

Last year, Durga Puja was celebrated with many strict restrictions and visitors were instructed to pay their respects from a distance, without entering the pandal.

Rules and restrictions might remain intact this year too. According to a Hindustan Times report, Chief Minister Mamta Banerjee has requested puja organisers to “strictly follow COVID-19 safety protocols and wear masks.”  She also added, “We will review the COVID-19 situation and then decide on whether to host the (Durga Puja) Carnival.” 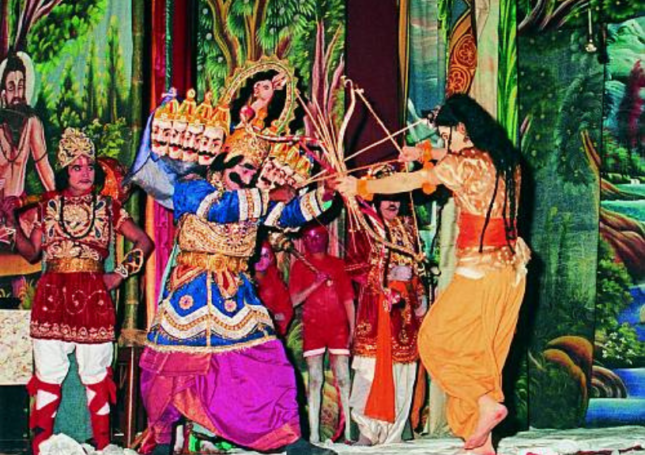 Last year, Durga Puja celebrations were a muted affair in Bihar and Uttar Pradesh (UP) as well, with people being urged to set up idols of Goddess Durga either at home or in temples. Pandals and processions were not allowed, keeping in mind the global pandemic. This year, the celebrations are set to make a comeback in UP with necessary guidelines put in place.

However, the report states that “idols should be installed in the traditional but empty space, their size should be kept as small as possible and there should not be more people than the capacity of the ground.”

Rituals, when it comes to celebrating Durga Puja in Bihar, are similar to those of UP — both states mark the last day of the puja by feeding young girls. Altars are propped up for Goddess Durga, and the Durga Saptashati is recited to praise the goddess as the supreme power.

In both states, Navratri is marked by Ramlila — a performance based on the life of Lord Rama, including the kidnapping of his wife Sita by Ravana and the victory of good over evil. It is staged across the states in theatres and on temporary stages. 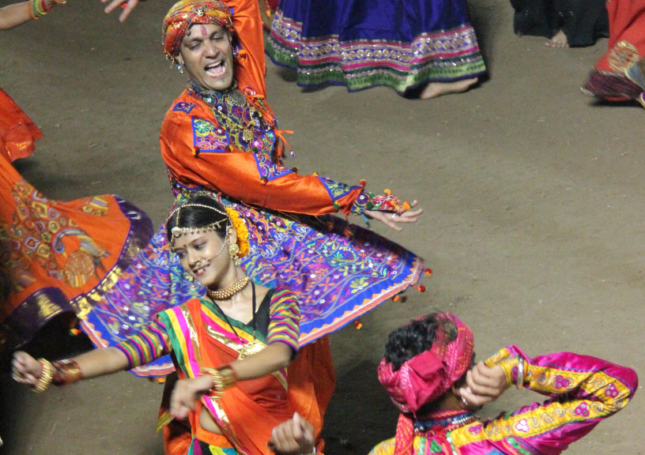 Ardent devotees of the goddess fast for nine days to pay their respects to the nine incarnations of Durga. Women who fast, worship an earthen pot, or garbo, decorated with diyas, or earthen lamps. The pot symbolises life within a womb and is considered a source of shakti (power).

From observing fasts to performing the famous Garba — a dance where men along with women circle the idol or the garbo — the people of Gujarat surely know how to celebrate festivities with gusto. They, too, conclude Durga Puja festivities by feeding young girls and giving away either money or gifts.

While the festivities were scaled down in 2020, this year seems a little brighter. The Gujarat government has given its nod to Garba performances that can take place in residential neighbourhoods and societies, with a maximum of 400 persons. 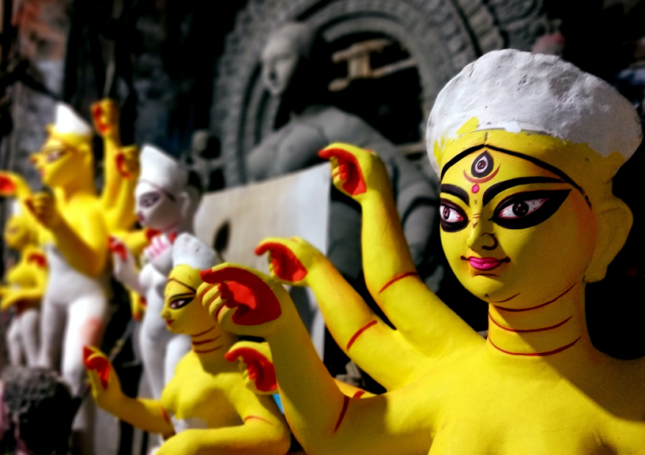 People of Chhattisgarh, especially the tribals of Bastar, go all out when it comes to celebrating Navratri. The Bastar tribe holds a 75-day-long celebration, bringing the festivities to a close on the 13th day of the waxing moon or shukla paksha.

The tribe also follows a five-centuries-old festival called Bastar Dussehra where the idols of Devi Maoli and her sisters are carried in a procession from Bastar to the Danteshwari Temple in Jagdalpur.

Although strict restrictions were in place last year, no guidelines have been issued by the government till now. However, similar rules, including wearing a mask and social restrictions, are expected to be imposed this year, too. 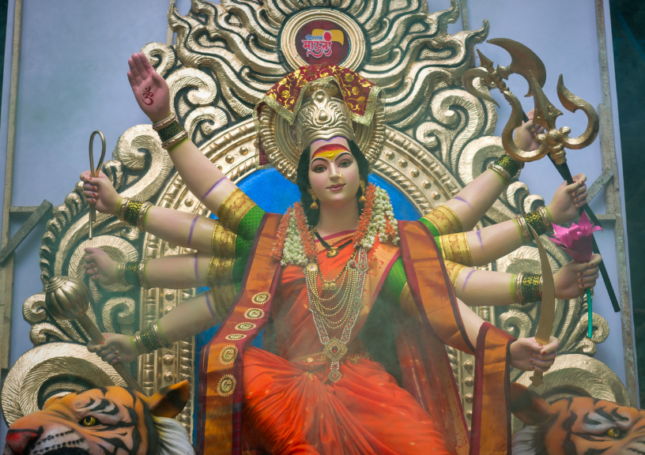 What unites the Gujaratis and Maharashtrians, you ask? It’s their immense love for playing dandiya. The people of Maharashtra dress to the nines and love to dance the night away on energetic beats. The festivities end with Dusshera.

Maharashtra has been one of the worst-hit states during the COVID-19 pandemic and had to curb their celebrations last year. Although people could visit the pandals in small batches, dandiya celebrations were cancelled by the government.

This year’s guidelines issued by the Brihanmumbai Municipal Corporation (BMC) encourage devotees to opt for online darshan, an opportune visit to a deity, temple and other holy entities. Those visiting the venues physically are required to wear masks and maintain social distancing. 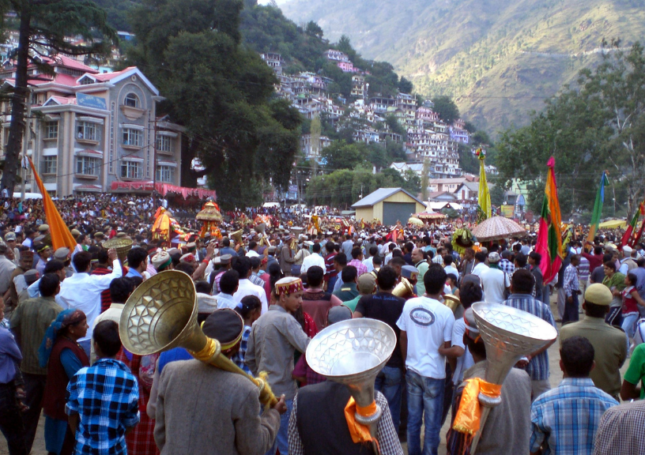 The northern state of Himachal Pradesh is famous for being home to many goddesses, and here is an interesting fact: Navratri celebrations commence in the state when the rest of the country is winding up festivities.

The devotion of the people of Himachal to Lord Ram is brought to life during Navratri when Lord Rama is worshipped, along with other deities, at the Dhalpur Maidan in Kullu Valley.

The state has its way of celebrating Dussehra: the Kullu Dussehra. It involves the burning of wood and grass on the banks of the Beas River. This symbolises the burning of Lanka or Lankadahan. On this day, the entire valley is adorned like a bride, and a huge procession is taken out, showcasing idols of deities to the Paddal ground.

Keeping in mind COVID-19 restrictions, many temples started online darshan last year. However, the government has allowed devotees to visit temples this year, but they must maintain social distancing and wear a mask. Organising langars, bhandaras and jagrans are banned. 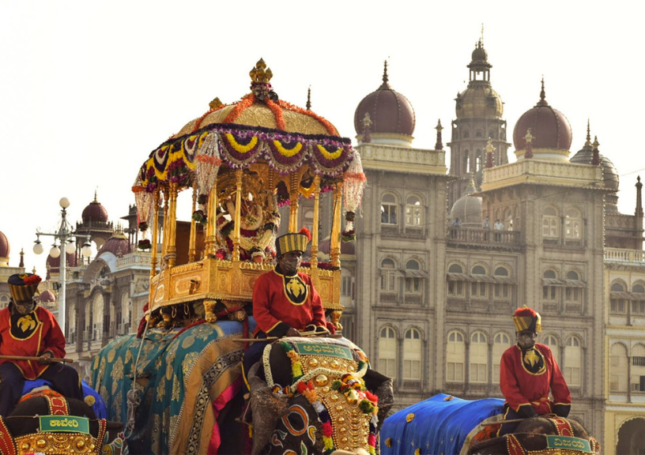 Karnataka is known for its Navratri festivities, especially in the city of Mysuru, popularly known as Mysore.

The state festival of Karnataka, Mysuru Dasara, is celebrated with nothing but grandeur and follows the same rituals that were performed at the time of King Raja Wodeyar I in 1610. The royal sword is worshipped on Mahanavami (the ninth day of the festival) by placing it on a throne. Later, a procession of elephants, camels and horses is taken out carrying the sword.

The Mysuru Palace is a sight to behold at this time of the year. It is decorated with hundreds of lights and flowers on Dussehra. Celebrations on this day are also marked with a grand procession called Jambo Savari, which carries Goddess Chamundeshwari — an avatar of Durga. The procession takes place at the palace and fairs are held across the city.

However, 2021 has dimmed the joy of celebration in the state as the Karnataka government has banned large-scale social, political, religious and cultural gatherings. No public celebrations are permitted during the festive season. 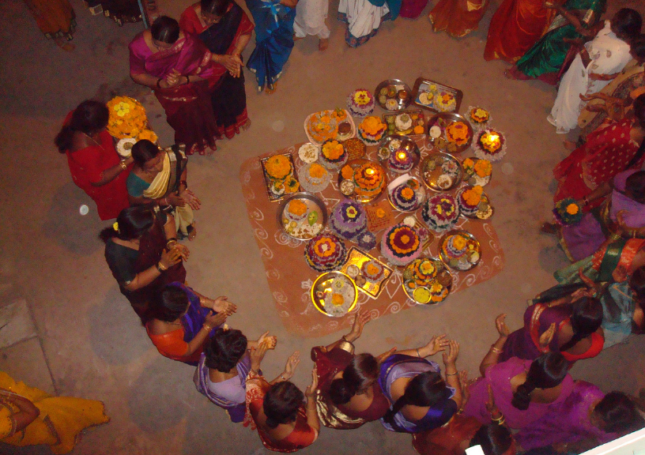 Navratri is a special occasion for the women of Andhra Pradesh, especially those who are unmarried. They worship Goddess Gauri to bless them with a suitable partner. The festival is known as Bathukamma Panduga (Mother Goddess, Come Alive!) in Telugu.

Women create flower stacks for the Goddess, only to immerse it in a water body on the final day of the festivities.

Though the state government restricted mass gatherings during the Ganesh Chaturthi festival this year, no guidelines have been released for the Navratri festivities yet. However, with Bathukamma Panduga around the corner, similar rules over public gatherings and social distancing are expected. 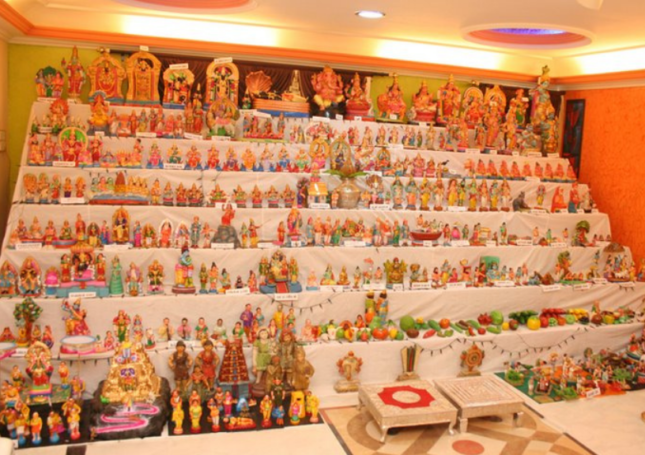 Durga Puja is celebrated with thrice the pomp and show in Tamil Nadu as three goddesses are worshipped on the last three days of the festival. The people of the southern state worship Durga, Saraswati and Lakshmi and exchange gifts, sweets and coconuts amongst members of their families.

The highlight of the festivities is the Golu or Kolu ritual. According to the practice, young girls and women place heirloom dolls and figurines, which have been passed down through generations, on a small wooden platform. These dolls signify famous legends, gods and goddesses.

Ayudha Puja is also a part of the rituals. Performed on Mahanavami, Goddess Saraswati is worshipped on this day. Agricultural implements, books, musical instruments, machinery and automobiles are also revered along with the goddess.

However, celebrations will take a backseat this year as the state is still cautious about the spread of COVID-19 and has imposed a ban on conducting religious events and a lockdown till October 31 has been put in place.

Places
Vila Nova De Gaia’s Newest Attraction Generates Unprecedented Buzz
Places
This New Luxury River Ship Might Be The Best Way To See...
Places
Once A Sleepy Corner Of Southwest France, Cognac Has Become A Spirits...
Places
Why India Should Be Your Next Safari Destination
Places
World’s First-Ever Warner Bros. Hotel To Open In Abu Dhabi This November
Places
The World’s Highest Infinity Pool Is Coming To Dubai — With 360-Degree...

A stunning picture of the Jama Masjid, Delhi. Phot

“The secret to a good morning is to watch the su

#Travelupdate Singapore has announced the removal