The rugged landscape and kind residents of Spiti Valley in Himachal Pradesh make for the perfect antidote to city life. A wide range of voluntourism programmes offered by a social enterprise not only make the life of locals easier but also help visitors tap into the essence of ‘the middle land’. Text and photographs by Rashima Nagpal

For as long as I can remember, I have wanted to visit Spiti Valley. I have an affinity for the obscure, far-flung corners of the world. I loved being in Ladakh a few years ago, and I know Spiti isn’t any less charming. But I also know that this won’t be just another trip—I have a purpose in mind. The purpose of volunteering with Spiti Ecosphere, a social enterprise I discovered many moons ago.

Ecosphere’s roots lie in Muse, an NGO that was founded in 2002 by three friends (one of whom is Ishita Khanna, Ecosphere’s current director) with a shared passion for the mountains, environment, and the valley of Spiti in particular.

It started with their vision for sea buckthorn, a wild shrub with bright orange berries that grow along the banks of River Spiti, which runs through the valley. For thousands of years, the shrub has been used by traditional medicine practitioners or amchis. But its ecological and commercial potential was explored only a few decades ago. Muse engaged locals and set up processing units to make delicious products out of sea buckthorn. It didn’t take long for the wild experiment to turn into a fruitful brand called Tsering, which means ‘blessings for long life’ in Spiti Bhoti, the local Tibetan dialect. Tsering offers all the natural benefits of sea buckthorn in the form of jam, squash, syrup, tea, powder, as well as dried berries. The two outposts of Ecosphere in Kaza—the restaurants Taste of Spiti (since 2014) and Sol Cafe (since 2012)—proudly display Tsering products on their counters and even use them in their kitchens.

After a 10-hour journey from Manali to Kaza, on the rockiest roads I’ve ever experienced, I should be exhausted. Instead, I’m exhilarated. It is hard not to be, after gaping at the unbelievable landscapes en route to Spiti Valley, which is often called ‘the middle land’ due to its location between Tibet and India.

The delights of Spiti are only amplified by the fact that I’m on a two-week break after months of a pandemic-induced work-from-home rut. This is also my first attempt at voluntourism. I’ve signed up for Create for a Cause, a programme that allows people from creative fields to work with Ecosphere. Khanna and I decide that I will document some volunteering experiences—in words and visuals.

My base for the first few days is Old Kaza, arguably the most commercialised neighbourhood in Spiti Valley. This is where Ecosphere has set up its base, physically. Effectively, however, Ecosphere’s footprints are everywhere in the valley. “We have around 550 passive solar rooms, over 150 greenhouses, an increasing number of solar water pumps that we’ve recently begun setting up, and more initiatives spread across the valley,” Ishita tells me.

I spend my first few days vacillating between the two restaurants of Ecosphere located on different ends of the town square. I get to go behind the counters and inside the kitchens, lend a hand in cooking, learn traditional recipes, wait tables, interact with travellers from around the country, and capture all these moments. Another volunteer, who is on a sabbatical from his corporate work life in Jaipur, has signed up to run Sol Cafe for a month. “I want to open a cafe of my own someday, hopefully somewhere in the mountains. This is a great learning experience for me,” he shares.

As fun as it is, running a cafe comes with its own challenges. Managing billing books, taking orders to a T (especially during rush hours), and keeping your calm with the occasional fussy customer is not as easy as it seems from the other side of the counter. The local cooks help volunteers get into the groove. Lobzang aka Lobstar, stationed at Taste of Spiti, is often found giggling or humming and is an expert at making regional dishes like keu (a hearty pasta dish of sorts), tirik (a staple wheat bread), and sha phaley (stuffed, deep-fried, palmsized dumplings).

Singey, at Sol Café, is the quietest soul to be around and really good at whipping up all sorts of coffees. And then there’s Ziki, Ishita’s mountain sheepdog, to give me the furriest hugs. 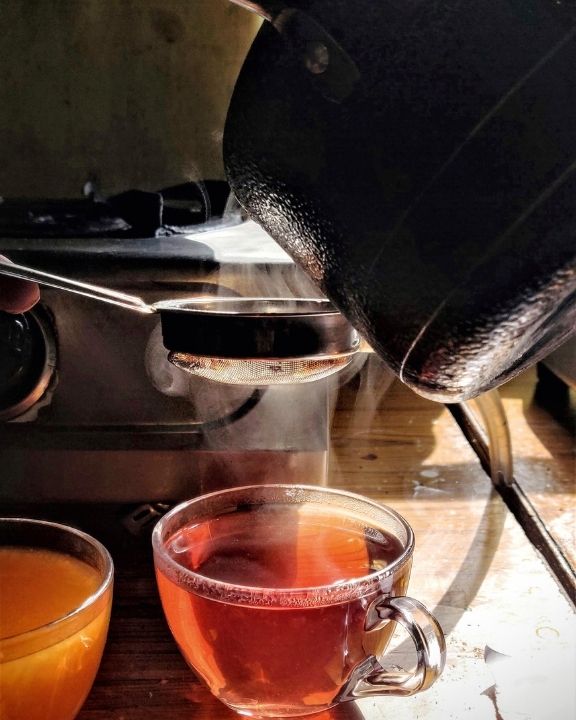 The teams at both the cafes make sure I’m well-fed and taken care of so far away from my home. It helps that both the outlets have a warm and casual setting, replete with books to read and souvenirs to buy. Sol Cafe also features Sol Cinema, a hall that can be booked for movie screenings in the evenings.

On the other side of Kaza, across the river, is a hamlet called Kawang. It has no more than five houses (belonging to five brothers, I’m told), a nunnery, and a primary school with a staff of three—and just one student! I am assigned to the eldest brother’s house, surrounded by lush green farms and overlooking a riverbed. Here, Ecosphere has helped in setting up two greenhouses and a homestay. Back in 2004, the organisation ventured into the eco-tourism sector with the launch of five family-run homestays in the villages of Langza, Komic, Lalung, Dhankar, and Demul.

At the village house, I’m accompanied by another volunteer who has signed up for the month-long Farming Feats programme. The man of the house, whom we refer to as ‘acho’, as big brothers are called in Spiti, gives us a tour of the farm. The vast, unsheltered crops of barley dancing amid mighty mountains make my heart flutter. The two greenhouses make a safe haven for all sorts of herbs and vegetables to grow. They may look small and insignificant but greenhouses such as these prove to be the keys to self-sustenance in the harsh winter months when Spiti Valley is covered in snow and practically disconnected from the rest of the world. Acho even shows us a sample of the composting toilets that the locals use when it’s so cold that water freezes in the pipelines.

Thanks to rapid climate change, the adversities in the region are not limited to winter. Shortage of snowfall, for instance, often leaves the natural springs dry during summer, posing problems for irrigation. Ecosphere has been trying to combat this issue in more ways than one: while artificial glaciers help fill the springs in some villages, some others practise contour trenching for agriculture.

Besides agricultural practices, we get to learn—and live—the everyday life of a traditional Spiti household. Even in July, the air is quite cold in the morning. But acho and his family of nine are up and about, doing their chores. Between nine and 10:00 am every day, we sit down for a hot breakfast of aloo bhaklep, the Tibetan version of a stuffed aloo paratha, in the traditional dining room with floor seating. At the farm, rounds of weeding, watering, and simply watching over the fields fill my afternoon hours. In the evenings, the adults like to sit in the field with cups of tea and bread while the kids play outdoors: one of them is skilled at skating, and another likes to wander the neighbourhood wearing swim goggles. By the end of the first day, I have nicknames for each of the three toddlers of the house.

In this truly remote home in Kawang, the nights are surreal too. The Milky Way appears on my window in all its glory. I struggle to sleep, confronted with its cosmic brilliance, always hidden in plain sight for city dwellers like me. I photograph it for posterity. And I thank my stars.

The road to Spiti Valley goes through Manali or Shimla. While the route from Shimla via Kinnaur is more developed and stays open almost through the year, the road from Manali is rocky and opens only during summer (May/June–September/October, depending on rainfall). You might want to factor in the distance too. Spiti is roughly 200 kilometres away from Manali, a journey that takes around 10 hours under ideal circumstances. Whereas the distance from Shimla is almost twice as much and requires an overnight halt en route; Rekong Peo is a popular halfway point. Most people arrive in Spiti via one route and go back via the other, completing the circuit and experiencing the best of both worlds.

Every day, a local HRTC bus leaves for Kaza from Rekong Peo around 7 am, and from Manali around 5 am. If you’re starting from Manali, you can also book a seat in a private minibus (INR 1,000 – INR 1,500 per person), which is faster and more comfortable than the bus. Simply check with your hotel manager or one of the many travel agents on Mall Road. Similarly, in Kaza, the taxi union’s office (opposite the bus stand) is where you can book your choice of transport for the return journey, or for touring in and around Spiti Valley. If you’re travelling in a group, you can rent a self-drive car for the entire trip if you’re experienced in driving on such hilly terrain.

If you’re volunteering with Spiti Ecosphere, your stay and meals (three a day) are covered in the nominal fee charged against each volunteering programme.

Be it running a cafe, teaching basic English at a nunnery, creating content for a cause, or helping a local family with farming, Spiti Ecosphere offers a range of volunteering programmes.

All you have to do is fill an application form well in advance and spare at least a month to visit and volunteer between May and October. (The minimum duration of Ecosphere’s volunteering programmes has been increased from a fortnight to one month recently.) For updates, check out @spitiecosphere on Instagram or visit spitiecosphere.com.

Related: Through The Lens: The Ancient Village Of Malana, Himachal Pradesh

Places
Want A Beach Bachelorette For Your Bestie? Check Out These Destinations Below!
Places
These 7 Road Trips From Chandigarh Will Elevate Your Weekend Plans
Places
Soak In Some Sun At These Indian Destinations To Beat Seasonal Depression...
Places
Planning Your Honeymoon? Check Out These Off-Beat Destinations In India!
Places
7 Offbeat Weekend Getaways From Hyderabad We Bet You Didn’t Know About!
Places
Future Travels: 12 Bucket List Destinations For Solo Travel