Karl Lagerfeld’s legacy is marked at the Grand Lisboa Palace in Macau as the resort opened the doors to the first and only hotel tower designed by the late fashion legend earlier this week. By Eshita Srinivas

Designed by and named after the late German fashion designer and photographer and the creative force behind the international fashion brand Chanel, the Karl Lagerfeld hotel tower at Grand Lisboa Palace, Macau, opened its doors to guests on December 3, 2021. The late designer, who passed away in 2019 at the age of 85, worked on this project for five years, meticulously going over each element of the tower. This is his only hotel masterwork in the world, and the property is reflective of his sharp and refined approach to style.

The East meets the West at the luxurious Karl Lagerfeld tower 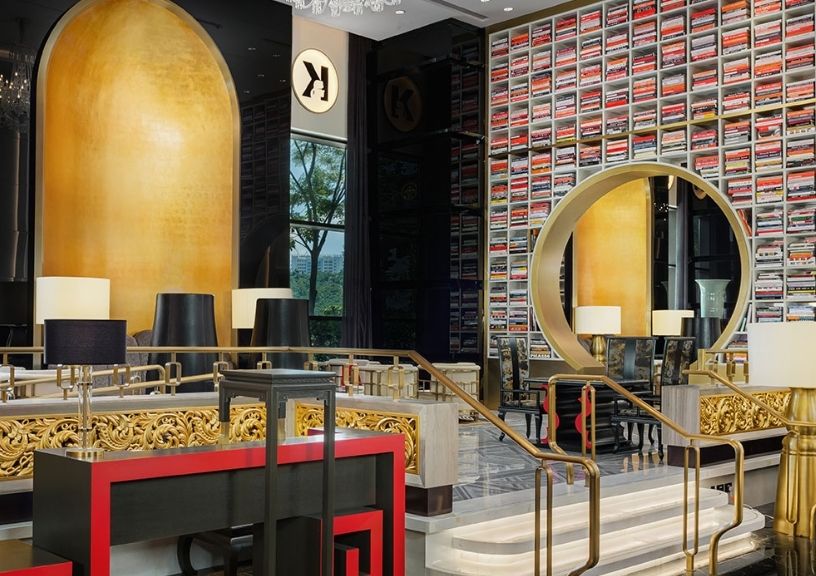 The 271 luxurious rooms and suites at the property are divided into six categories with two rooms and four suites, all of which are furnished with an elegant blend of Chinese and Western aesthetics. The rooms come with eye-catching cherry blossom designs on the walls, floor-to-ceiling windows, bathtubs, and double vanities.

The suites are spacious and luxurious with furnishings that have been specially commissioned, right down to the circular room dividers that reference traditional Chinese moon gates. The wall fixtures are also a reflection of the late designer’s take on chinoiserie. The Autograph suite is the largest of all suites and comes with two bedrooms, a large living room, walk-in closet, study room, media room, dining area, and a fully equipped kitchen. It also offers exclusive in-room check-in and butler services.

The tower is bespoke with inspired designs and is the region’s first hotel based on a fashion concept. Guests will find bits of the late fashion designer in every detail of the hotel, from the furnishings to the amenities. The book lounge in the lobby, for instance, draws on the late artist’s passion for books and references the famous library at his photo studio in Paris. With over 4000 books on display, the space pays homage to the fashion icon’s personal interests and is curated by the 7L Bookshop which was owned by the designer.

Guests at the hotel can go for a swim in the indoor swimming pool with chinoiserie details, work out at the fully equipped gym with certified personal trainers, or dine at the Portuguese restaurant Mesa, which was also designed by the late designer and has been open since June.

Related: Stay At An Antoni Gaudí-Built House In Barcelona For Just INR 88

Stays
An Icon Of French Elegence, Le Bristol Paris Offers Its Guests True...
Stays
13 Of The Most Expensive Hotels In The World
Stays
This Coastal Mexican City Has Gorgeous New Tree Houses For An Off-The-Grid...
Stays
10 Waterside Hotels Around The World Where You Can Arrive By Boat
Stays
This 32-Foot-Long Train On Display In A Florida Hotel Is Completely Made...
Stays
18 Stunning Castles Where You Can Live Like Royalty